Beating hunger with the Atkins Diet

It’s never much fun trying to lose weight, especially if you’re someone who really loves food. Although I guess that pretty much covers anyone who’s overweight. I’ve been a foodie all my life. I was brought up eating lots of butter and cream, steak three or four nights a week and lots of rich creamy desserts. I didn’t ever have a weight problem, in fact I seemed to be able to eat as much of anything as I wanted. The problem began when I stopped playing A-grade water polo at the age of about 26. It wasn’t anything dramatic, I just noticed after my first sports-free Christmas that my stomach wasn’t quite as flat as it was. I just put it down to losing a bit of muscle tone because I wasn’t training six days a week any more. 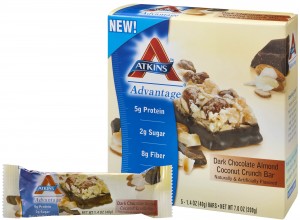 Then came the day when my favorite jeans wouldn’t fit, and I started to realize that I was actually putting on a little weight. About that time I started weighing myself to check. And also about that time I finished my education and started off in a new job sitting at a desk all day. Over about six months my scales revealed that I was steadily gaining about two pounds a month. That’s when the alarm bells really started ringing.

The next few years I really ballooned out. It wasn’t all steady weight gain. I would gain five or six pounds, then cut back a bit on food and plateau out for a while, then start gaining again. By the time I was 32 I was definitely fat, although I was eating far less than I had ten years earlier and had given up much of the stuff I loved. Soon I’d cut out butter and cream altogether, ate only fish and chicken and gorged on vegetables and grains whenever I was hungry. And that was all the time.

Life became really miserable – I was basically eating mostly foods I didn’t like much but I was still fat. Grossly fat, in fact. I tried every diet and weight loss supplement going, I even tried being vegetarian. And then I heard about the Atkins Diet.Beating hunger with the Atkins Diet

The Atkins Diet for me has been really amazing. Not only am I back to the weight I was at 25, but I eat lots of the foods I love – meat, eggs, cream and butter – and take it easy on all those vegetables which I was never so keen on anyway.

The Atkins Diet makes it all easy. It can be a bit tough on the induction phase, while your metabolism adjusts to the fat-burning mode which the diet forces it into, but the strictest part of that is only two or three weeks and then you gradually expand it through the next two phases. Once I got all my weight off and started my lifetime maintenance, I was eating pretty much the way I wanted to. You really can’t beat the Atkins diet!